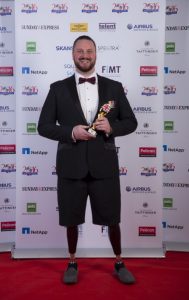 On his second tour of Afghanistan in 2010, Clive was lead man on patrol in Helmand Province Afghanistan, when he stepped on an improvised explosive device. It threw him 30ft into the air, resulting in him losing both of his legs and multiple injuries.

Clive’s heart stopped twice on the journey back to the Queen Elizabeth Hospital in Birmingham. After waking up from his induced coma, he then had the monumental task of recovery, learning to live life as an amputee in the civilian world. His journey of learning to walk again began.

In the beginning of 2016, Clive underwent revolutionary surgery that took him to the other side of the world, to Sydney, Australia where he underwent a procedure of Osseointegration (Direct Skeletal Fixation).

In April 2016, Clive was awarded the 2016 Inspirational Award, at The Soldiering On Through Life Trust. It’s a national recognition award for the Armed Forces Community.

His award was justified by the outstanding commitment he had shown to his recovery and his dedication to helping other wounded injured and sick military personnel.

Clive has become an ambassador for Troop Aid, the charity that supports our injured troops. He is one of the Band of Brothers for Help for Heroes. Clive is so well thought of in his home town of Cannock, Staffordshire, that the local District Council unveiled a brand new housing complex in his name, in honour of the sacrifice he made.  Additionally, Clive was asked to be the Leading Ambassador for the Wolves in the Community Trust. This is his local football team’s charity, that helps underprivileged children succeed in football in the UK and overseas.

Clive will captivate, motivate and inspire any audience. His story is truly unique and compelling – like nothing you will have ever heard before. He is driven with a passion to succeed and inspire in life.

I don’t know that I can find words to adequately describe your presentation. It was truly inspirational. No wonder you won that award at the Soldiering On Awards! So many visitors told me how impressed they were hearing your speech about your journey. It clearly was a serious subject but you managed to put it across with grace and ease. Your sense of humour was very well received.

His natural, self effacing manner and warm, friendly personality mean he easily relates to people from all sorts of backgrounds, from fellow military personnel to school children, from corporate sponsors to the general public

Clive is totally different to any motivational speaker you will have heard before!

Clive has worked with...